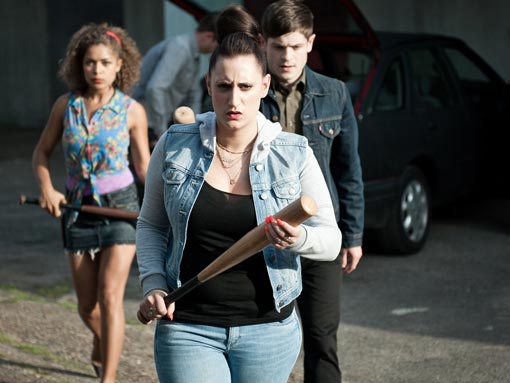 Lauren Socha will not appear in the fourth series of Misfits.

A Channel 4 spokesperson confirmed to Digital Spy that the 21-year-old actress will not reprise her role as Kelly in the E4 drama… Clerkenwell Films and Lauren Socha agreed some time ago that along with other cast members, including Iwan Rheon and Antonia Thomas, she would not be returning for the fourth series of Misfits, which is currently in production. Channel 4 supports both parties’ decisions.”

I’m so sad! Don’t know if I can still watch…

Part 3 of ArtWalk!
Part 2 of ArtWalk!
Part 1 (out of 3) of ArtWalk!
Friday ☀️
Check out @mariacgoodson virtual book launch tomorrow afternoon: Saturday 4/9 @ 1:30pm, EST. Link in bio✌🏾 & 💜
Thank you to @zorasden for the #writercrushwednesday shout-out. This community of Black women named after Zora Neale Hurston, one of my favorite writers, has been a source of support & community for me over the years. Gratitude. ✌🏾 & 💜
The sun came out! ☀️ I’m reading (virtually) tonight @7pm EST w/ fab writers Justin Sanders & @jaimefountaine for @davekisdavek book release from @akinogapress
This time next Friday we’ll be gearing up to read for @davekisdavek book release party. Mark your calendar & join us over on @akinogapress Twitch channel